Today Miracle had an ending and a beginning. Her time at Sunkissed Acres came to an end today. Lori, the founder of

Starved and abused with horrible wounds and so close to death

A couple of days later in her makeshift sling courtesy of the engine hoist in Mr. Gurley’s garage.

In a stall at Sunkissed Acres

Enjoying some turnout at Sunkissed Acres

Miracle still had a lot of recovering to do. She was so weak and atrophied that there were still days where she could not get up on her own and needed help.

One day some nice guys from the Chattooga County Water Dept. came to Sunkissed to help Lori get Miracle on her feet. Lori said they came saying they didn’t know anything about horses and they left saying “you can do it Miracle, and we’ll be back to help you anytime.” 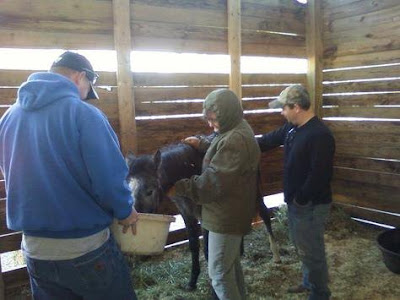 Taken this morning at Sunkissed Acres. Miracle making her pointy-nosed “I like scratches” face

Heart the Hinney, a resident at Sunkissed since 2008, was one of Miracle’s self appointed babysitters. Jason and I watched as she went over to hang out with Miracle and provide her with some company. Heart is another sad story. She was left chained to a tree in the woods and abandoned without food or water. When she became to weak to stand or defend herself some dogs started to eat her while she was still alive. She was covered in maggots. Three years later Heart has the run of Sunkissed Acres, and she lets newcomers like Miracle know that she has finally made it to a good place.

Jason and Lori are fellow Canadians so we paused for some “Oh Canada” pictures. One in front of the Canadian flag on our truck . . .

. . . and one in front of Lori’s golf cart that sports a Canadian flag

We stopped for a quick bite to eat at Burger King about halfway home. We ate by the trailer with Miracle and Jason shared some of his french fries with her. She ate each one he offered her. After the third one I told him not to feed her any more french fries!